Its Stimulypto time again! The Fed and the US Government are going on a $1.2 TRILLION spending spree related to the infamous coronavirus.

(Bloomberg) — The Trump administration is discussing a plan that could amount to as much as $1.2 trillion in spending — including direct payments of $1,000 or more to Americans within two weeks — to blunt some of the economic impact of the widening coronavirus outbreak.

Treasury Secretary Steven Mnuchin pitched $250 billion in checks to be sent at the end of April with a second set of checks totaling $500 billion four weeks later if there’s still a national emergency, according to a person familiar with the matter.

“Americans need cash now, and the president wants to give cash now. And I mean now, in the next two weeks,” Mnuchin said Tuesday at a White House briefing alongside President Donald Trump.

“It is a big number,” Mnuchin told reporters later on Capitol Hill. “This is a very big situation in this economy, we put a proposal on the table that would inject $1 trillion into the economy.”

The administration had been discussing a total aid package of $850 billion, but discussions later included spending as much as $1.2 trillion, according to people familiar with the matter.

The cash payments would be part of a stimulus plan Mnuchin is negotiating with Congress. The administration hasn’t decided on how much to send Americans, but wants the checks to exceed $1,000, according to two people familiar with the matter.

Mnuchin’s proposal included $300 billion for small business loans, $200 billion in stabilization funds, $250 billion in cash payments and a possible second round of checks, people familiar with the matter said. Including tax deferrals, that would bring the cost of the plan to around $1.2 trillion.

Also, The Federal Reserve on Tuesday opened an emergency lending program for primary dealers in yet another step aimed at keeping cash flowing into a U.S. economy shuddering under the impact of the coronavirus pandemic.

The Primary Dealer Credit Facility “will offer overnight and term funding with maturities up to 90 days and will be available on March 20, 2020,” the central bank said in a statement.

The facility will run for at least six months, the statement said, and may be extended. It will be offered at the discount rate, which was cut to 0.25% on Sunday evening in an emergency move by the central bank when it lowered its benchmark federal funds rate to nearly zero.

The Dow jumped 1,000 points on the sea of spending. 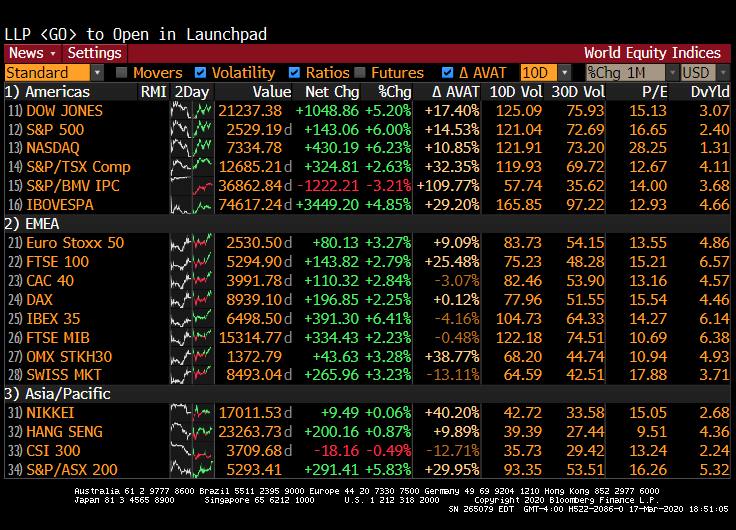