Given the reaction of The Federal Reserve to the Covid-19 virus, it is understandable for investors to freak-out about possible Weimar Republic / Venezuela-like hyperinflation.

(Bloomberg) — Even a calamity of disease, death and economic destruction afflicting the world all at once isn’t enough to suppress the notion in some quarters that inflation could return with a vengeance.

The coronavirus crisis has killed hundreds of thousands, incapacitated millions and affected the livelihoods of billions — prompting policy makers to fear a deflation spiral reminiscent of the Great Depression. But economists including former Bank of England official Charles Goodhart, and investors such as BNP Paribas Asset Management, are asking if a different phenomenon lurks in the wreckage of global growth.

IMF predictions for inflation rate at end of 2021

Yes, inflation rates are muted in the short-run, but the surge in government spending and The Fed balance sheet is scaring some people about “inevitable” hyperinflation.

And the surge in M2 Money Supply YoY is leading some to panic.

But like the Titanic that sank after striking an iceberg in calm seas, there are calm seas on the inflation front. The EUR Inflation Swap Forward 5Y5Y is less than 1%. 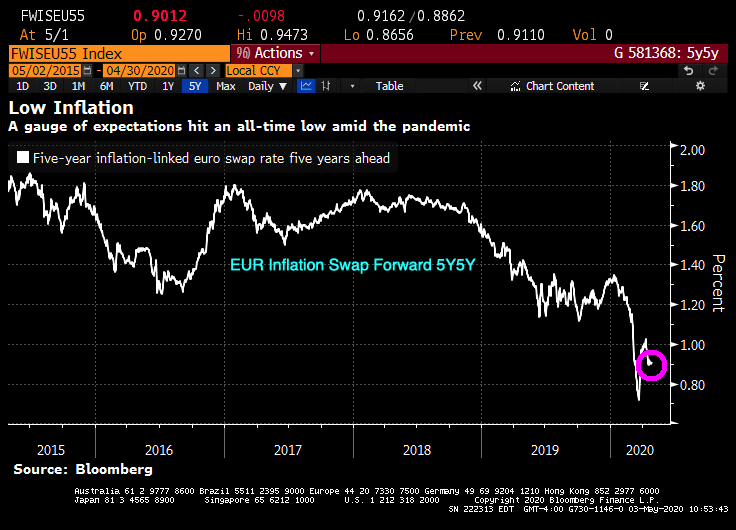 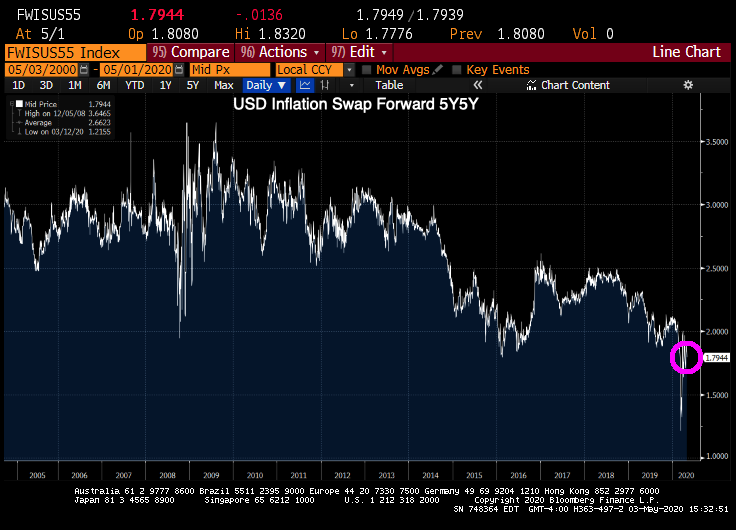 But USD Swaption volatility remains calm after a jolt upwards in March. 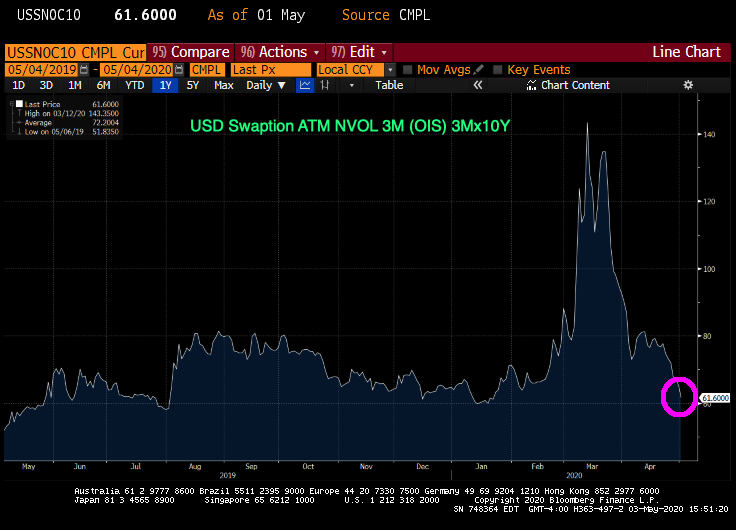 And the US Treasury Inflation Indexed curve is negative beyond 3 years.

So, the data is showing calm inflation seas, not gut-wrenching Venezuelan-like inflation.

The COVID-19 virus sweeping the globe is having dramatic impact on asset and commodity prices. Particularly gold.

This will not be the Last Contango for Gold.

And good luck finding physical gold in the form of gold bars. Gold coins, on the other hand, are available. 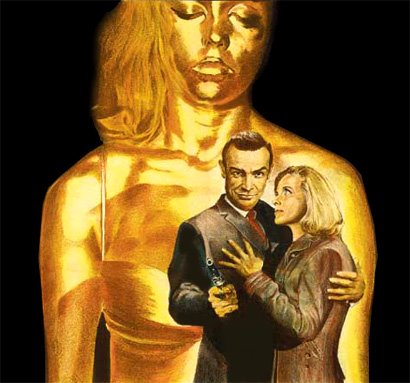 A liquidity trap is a situation in which, “after the rate of interest has fallen to a certain level, liquidity preference may become virtually absolute in the sense that almost everyone prefers holding cash rather than holding a debt which yields so low a rate of interest.”

Well, Buckaroos, we are in a liquidity trap with the 3 month Treasury yield at -0.025%.

A closer look at the T-bill market today. 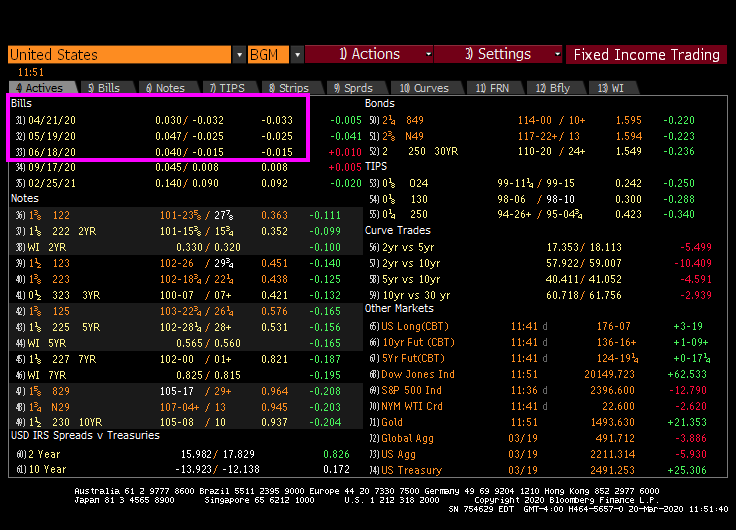 So here we sit in a classic liquidity trap!

Mega thanks to Jesse at Jesse’s Cafe Americain for the jail jpg.

Frankly, I like The Byrds version of Buckaroobetter with the great Clarence White on the Fender Telecaster B-Bender guitar.

It is the night before Monday opening.

And it is ugly.

Bond market futures are up, meaning yields are down. 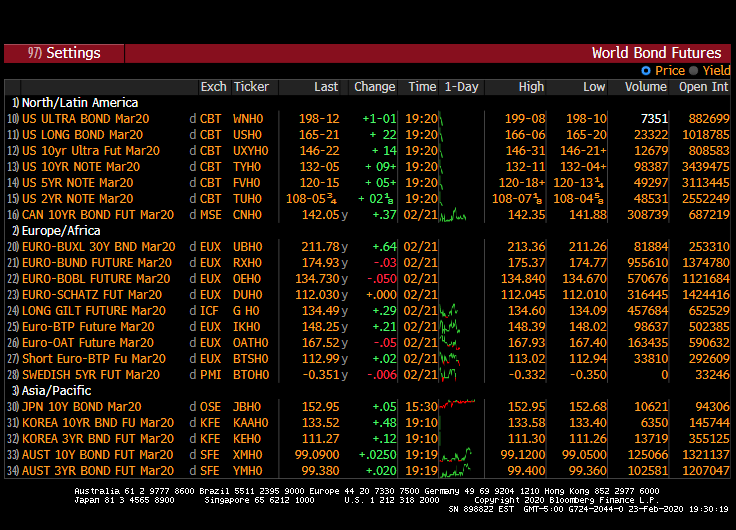 Yes, it is the coronavirus impact global supply chains.

Or it was Tyson Fury licking Deontay Wilder’s neck in their rematch fight on Saturday night.

The US is experiencing the Dollar Bop!

The Dollar Index looks poised for a run at the 100 level for the first time since 2017 as investors seek out the safety of American assets amid the ongoing coronavirus spread.

The U.S. currency has benefited this week from a narrowing in haven options, with the yen slumping to a nine-month low on fears the outbreak could push an already struggling Japanese economy into recession. In contrast, U.S. stocks closed at a fresh record Wednesday, Treasuries are seeing continued demand and a bullish golden cross pattern is set to form in the dollar gauge, suggesting further upside is possible.

Gold surpassed $1,600 an ounce this week and its climb may not be over yet. The GTI Vera Convergence Divergence Indicator, a technical measure which detects trend exhaustion, triggered a buy signal on Tuesday, its first since the end of January. Growing concern over the potential impact of the coronavirus on the global economy is boosting haven demand for the metal, which is now closing in on a seven-year high.

The coronavirus is ravishing China … and may soon ravish the USA as well. As a result, the inverse correlation between gold and the US dollar is weakening and resembles the weakening that occurred during the financial crisis.

Yes, gold is rising again in the face of coronavirus fears ravaging the Chinese economy.