Calstrs, which sounds like a cholesterol-reducing medication, is selling $281 million in green municipal debt to fund expansion of their Sacramento headquarters.

(Bloomberg) — The California State Teachers’ Retirement System may have just missed its investment goal but its debut municipal-bond sale Thursday is right on target.

The public pension, the second-biggest in the nation, is selling $281 million in tax-exempt municipal green bonds at a time when wealthy Californians are snapping up such debt to drive down their tax bills and when buyers are increasingly seeking investments intended to lessen the impact of climate change. The pension, which posted a 6.8% return shy of its 7% expectation for the year that ended in June, is using the bond proceeds for an expansion of its West Sacramento headquarters designed to meet high environmental standards, including the ability to achieve zero net energy consumption.

While investors generally haven’t paid higher prices for assets complying with environmental, social and governance principles, that may change in the future, [famous last words] said Eric Friedland, director of municipal research at Lord Abbett & Co. That makes the Calstrs bonds, which are already linked to a strong state credit because of the financing California provides for the pension system, even more appealing, he said. (or appalling).

“If you believe that there will be more of an ESG focus going forward, and that people will pay a premium for green bonds, then you’re basically getting that for free right now,” Friedland said.

The new building, a 10-story tower, will link to the current headquarters and ultimately encompass 510,000 square feet serving 1,200 employees, according to bond documents. Elements include a child-care center, “irresistible stairwells” to encourage people to take stairs instead of riding an elevator and a cafe offering healthy meals with ingredients from the on-site garden, Calstrs Chief Financial Officer Julie Underwood said during the Environmental Finance conference at the Milken Institute in October.

Vanessa Garcia, a spokeswoman for Calstrs, said in an email that officials wouldn’t make public statements on the bond issuance through the California Infrastructure and Economic Development Bank until after the closing of the sale. The building is expected to open in 2022.

The pension hired Kestrel Verifiers to vouch that the securities meet the standards for green bonds from the Climate Bond Initiative. It makes sense that Calstrs would sell green bonds given how it uses its influence as a shareholder to drive social and environmental change, said Ksenia Koban, a municipal-credit analyst at Payden & Rygel Investment Management in Los Angeles. Calstrs, for example, has pressured Duke Energy to cut carbon emissions and retailers to adopt best practices for firearms sales.

Calstrs officials are “putting money where their mouth is in mainstreaming ESG practices and ideas,” said Koban, who called the bond offering “a great issuance.”

The state, which has booked years of surpluses thanks to its growing economy, plays a large role in the pension’s bottom line: it directly made 36% of all contributions Calstrs received last fiscal year and provides significant aid to school districts, which make their own payments to the pension. California lawmakers in this year’s budget made a supplemental payment to pay down the state’s share of the unfunded liabilities for the organization that represents more than 960,000 educators and their beneficiaries.

The system, which by law has limits on how much it can hike contribution rates, is five years into a plan to reach 100% funded by 2046. It has about 64% of the assets needed to cover its liabilities, according to the latest data.

The new bonds are rated A+ by S&P Global Ratings, which gives the rating a stable outlook because it expects the pension’s funded ratio to improve over the next two years. Moody’s Investors Service ranks the debt A1 and Fitch Ratings grades it AA.

Like many US pension funds, Calstrs is only 67.2% funded

Note that Calstrs has lowered their private equity investment target to 13% and raised their equity target to 47%. 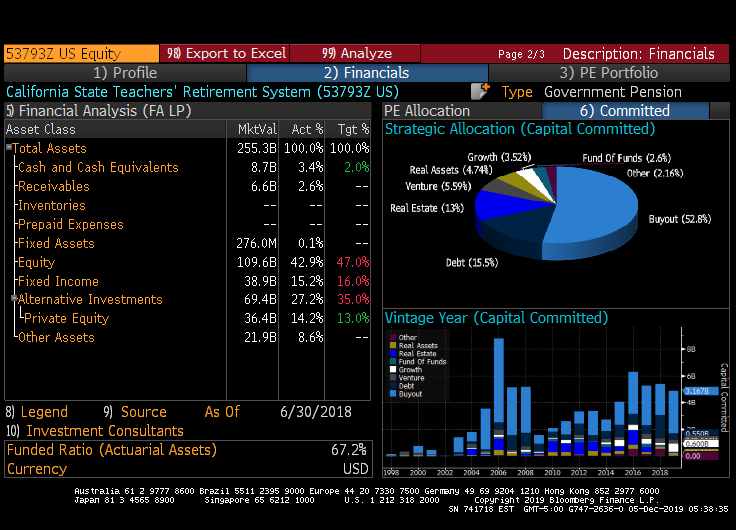 Like other pension funds, Calstrs is heavily weighted in the technology sector. 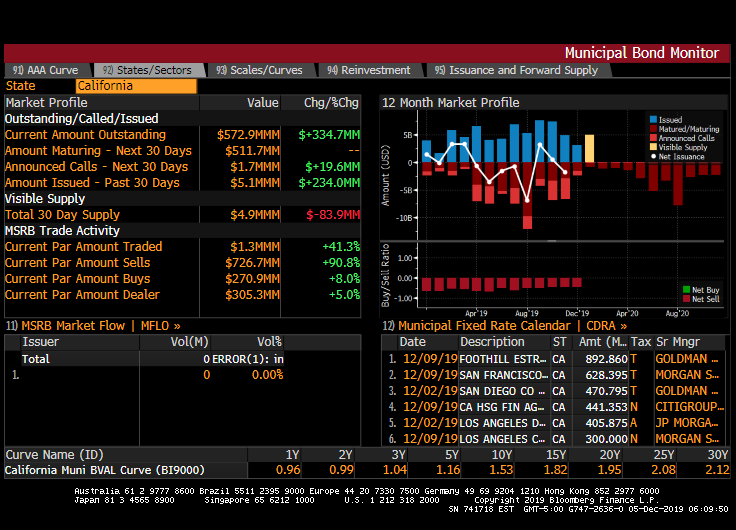 Back during the “days of malaise” under President Jimmy Carter, some clever wags thought of the term “misery index” which is the unemployment rate + inflation rate.

But the misery index today is only 5.37%, near the lowest since the mid-1950s. So, no hint of an impending recession. 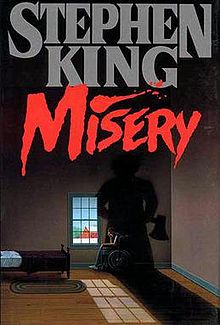 Currently, the misery index is near its lowest level since the mid-1950s. The US Unemployment rate is low and is inflation is pretty low resulting in a misery index of 5.37%.

So, no recession in sight according to this indicator.

High beta investment strategies are great … when the market is rising. But low (and negative beta) strategies seem appropriate when investors anticipate an equity market downturn.

Bloomberg — The market, it’s said, finds a way to maximize the pain. For everyone who fell in love with cyclical shares just in time for them to drop the most in two months this week, it’s an adage they can relate to.

Lurches in retail, technology and commodity stocks are spelling trouble for newly christened macro bulls, sending an exchange-traded fund that tracks high-volatility shares to its first decline since October. Back on top are health care, utilities and real estate, defensive sectors that dominated all year.

While none of the moves were huge, they stung fund managers who hoped economically sensitive industries were tickets to redemption after 71% of them trailed benchmarks through October. Betting on volatile shares has been a hallmark of late-season recovery strategies that looked like a sure thing as the S&P 500 rallied. This week was a reminder they’re not.

Among struggling equity managers, a spate of improving economic reports opened their eyes to the possibility a pivot point was at hand for cyclicals. The veil lifted, mutual funds dutifully raised overweight exposure to the highest level in two years, according to Goldman Sachs, increasing allocations toward industrials and semiconductors and away from utilities and staples.

And we are talking about BETA and not BETO!

California, the once great state, is now wasting money at a staggering rate. This time, a high-speed train from the California desert to Sin City.

The California Infrastructure and Economic Development Bank (IBank) has authorized a $3.2 billion tax-exempt, fixed-rate revenue bond issuance to help DesertXpress Enterprises LLC, an affiliate of Virgin Trains USA, build a high-speed train from Victorville, California, to Las Vegas. The new XpressWest service, at speeds of up to 180 miles per hour, will take about 90 minutes one way.

DesertXpress will be able to use the money to pay for the 135 miles of the project located within the state of California. This includes the costs of design, development, construction, operation and maintenance of the rail system itself; a passenger station; a maintenance facility; train cars; and electrification infrastructure. DesertXpress will also be able to use the bonds, which are sponsored by the California county of San Bernardino, to establish a debt service reserve fund, as well as pay for interest and other bond-related expenses. While total spending is listed at around $4.8 billion, “hard construction costs” are $3.6 billion.

Construction, which is expected to begin in the second half of 2020 and wrap up in 2023, according to an IBank staff report, will generate more than 15,800 temporary construction jobs.

Of course, you have to drive from Los Angeles across the mountains north of LA to get to Victorville, park your car and get on the high speed train to Las Vegas. THEN get cab or Uber to your final destination. Odd, since you can fly from LAX to Las Vegas for $39 each way.

There is only one way out: don’t build it! California taxpayers are already tied to a whipping post.

Napa Valley, Are You Ready?

PG&E Begins to Cut Power for Nearly 800,000 Customers Due to Wildfire Risk.

Large swaths of Northern California woke up in the dark early Wednesday as Pacific Gas & Electric began its sweeping plan to shut off power to about 800,000 customers in a desperate attempt to avoid wildfires sparked by wind-damaged power equipment.

The first power cutoffs, expected to affect 513,000 customers, began shortly after midnight in several counties around Sacramento, including Placer and Yuba, amid strengthening winds and continued to roll out into the early morning hours, eventually leaving millions of Californians in the dark.

By 12:30 a.m., power was cut in large portions of wine country, including Napa and Sonoma valleys. Portions of Marin County just north of San Francisco lost power next. Minutes later, the utility cut service in El Dorado County and sections of the upper Sacramento Valley. By 5 a.m., the outages had extended to Humbolt County to the north, Marin County to the south and as far as Nevada County to the east, according to the utility.

The second phase of the shutoff is expected to occur around noon in areas around Silicon Valley and the East San Francisco Bay. About 234,000 customers in Alameda, Alpine, Contra Costa, Mariposa, San Joaquin, San Mateo and Santa Clara counties are expected to be without power.

The utility said Wednesday it was also considering shutting off power to about 42,000 customers in the southernmost portion of PG&E’s service area, but specific locations have not been determined.

On Tuesday, Southern California Edison announced it also was considering preventive power outages. The utility said that given the anticipated strong Santa Ana winds, power could be cut off to more than 106,000 customers in parts of eight Southern California counties, including Los Angeles County.

Here is the current PG&E power outage map. Napa Valley (wine country), and the Sierra foothills are the major sufferers in PG&E’s attempt to avoid another Paradise, California incident.

Of course, PG&E is in bankruptcy having defaulted on its interest payments to bondholders.

PG&E bonds are trading at near par and their stock is trading at around $11 per share.

Are you ready for more power outages??

State and Federal pension funds are plagued by extravagant promises to pensioners and low yields on pension assets caused, in part, by Central Banks, like the European Central Bank and Federal Reserve.

(Bloomberg) Back in 2012, the world’s best-managed pension market was thrown a lifeline by the Danish government to help contain liabilities. That was when interest rates were still positive.

Seven years later, with rates now well below zero, even Denmark’s $440 billion pension system says the environment has become so punishing that it may be time for a change in European rules.

Henrik Munck, a senior consultant at Insurance & Pension Denmark, an umbrella organization, says the way liabilities are currently calculated “could cause a negative spiral” that forces funds to keep buying low-risk assets, drive yields lower and the value of liabilities even higher.

The warning comes as pension firms across Europe struggle to generate the returns they need to cover their growing obligations. In Denmark, some funds saddled with legacy policies guaranteeing returns as high as 4.5% have had to use equity to meet their obligations.

To calculate liabilities, pension firms use a complex mathematical formula constructed by the European Insurance and Occupational Pensions Authority (EIOPA). The formula is intended to shield funds from erratic market swings that artificially inflate or hollow out balance sheets. But with negative rates more entrenched, there are signs the EIOPA curve, as it’s called, may not be working as intended.

“When pension funds across Europe de-risk simultaneously, it may actually become pro-cyclical: it increases the price movements, and it could result in yet more downward pressure on the EIOPA yield curve, exacerbating the problem,” Munck said.

The curve is comprised of several elements. Its backbone — the euro interest-rate swap curve — has sunk since its implementation about four years ago, driving up the value of liabilities.

PFA, like many Danish pension funds, started scaling back guaranteed products for retirees many years ago. That’s given it a buffer to help absorb some of the shock of growing liabilities. But not everyone’s as well prepared. “If the discount curve is more volatile and you can’t hedge it, you can — if you don’t have enough capital — be forced to lower risk on the more hedgeable space, to compensate,” Damgaard said.